So it's James last day of school today and I really can't believe my baby boy has finished his first year in school.

I know James is really going to miss the TA they have in the afternoon as she was his TA in nursery so he has had her for the last two years.

So it's not been an easy year for James. He has had his struggles, mostly with his stubbornness. You ask him to do his keywords or his reading and he just mucks about.

He has some lovely friends most are from his class at nursery, but he has made friends with some of the kids that were new in the school.

I have loved going up to pick him up and hearing all about his day. I have been going up that little bit earlier so I can see him play outside with his friends. Its so cute hearing his little friends shouting "James there's your mummy and baby!"

Since James started school, his relationship with Freddie has got so much better. He comes out of school telling him he's missed him.

We had the end of term project outcome last week and mummy, daddy, nana, gaga and Freddie went into have school dinner with James and to collect our cook books that the kids had made this term.

Although it's the end of school, James is still not yet five and wont be five till the second last weekend of the summer holidays.

I'm so proud of everything James has achieved in reception and I'm looking forward to him continuing to flourish in year one. 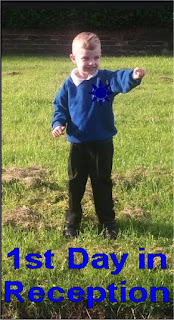 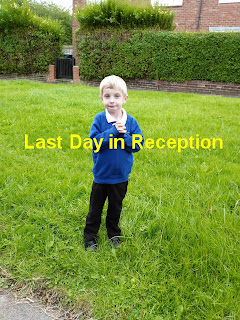