This week as been pretty much a right off. It started with mummy slowly getting over the nasty cough (which has finally gone woo hoo!) and ended with an emergency trip to GPs for James.

James has been off school with a nasty virus. He woke up Wednesday morning and had his breakfast but by the time we went to get him dressed for school his temperature had hit 39.4! So it was a day of calpol, ibruprofen and being curled up on the sofa. He then vomited at bed time so that ruled out school till Monday at the earliest. Thursday he was just curled on the sofa again his temperature kept hitting 39. By bed time he was refusing medicine. Friday as definitely the worst day. We couldn't get him to take any paracetamol or ibruprofen and by 4pm his temperature had hit 41.1! So it was a mad dash to get him to GPs for 5pm after mummy rang to see if there was anyway he could see GP. It's got to the stage where we have had to physically hold him down screaming to get some medicine into him to get his temperature down. 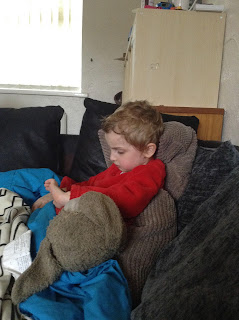 So poor Freddie has been stuck in the house all week due to ill big brother. He got out for a walk on Friday morning as daddy was on a day off so he could look after James. He also had to come to GPs with his big brother. Thursday we normally go to our fun,play and learn group at sure start but since James was ill we couldn't go and I think he really missed it as he hardly napped at all. 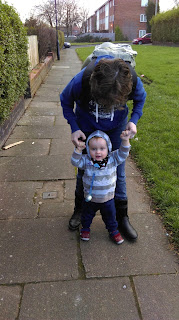