Be My Bear Review

James has had his favourite teddy bear CB since he was about 18 months old and the bear goes everywhere with us! If we go to Nana and Gaga's the CB comes too! When we went down to Surrey at half term yep CB came with us!

So when Be My Bear got in touch and asked if James would like to choose one of the build a bear kits from their website to try out he was thrilled!

The kit was due to be dispatched while we were in Surrey so we asked for it to be sent to Nana and Gaga's house so it would be kept safe till we got home! We picked up the kit when we got back from Surrey when we went to stay with Nana and Gaga for a few days! 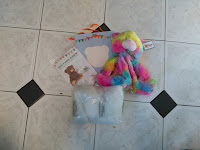 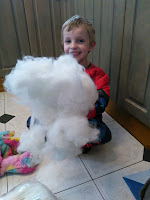 We were going to do the kit one night when Freddie had gone to bed early as we didn't  want little fingers getting into things, but we ended up doing the kit when James had a snow day from school and daddy had been sent home from work due to the weather! This meant James wasn't too tired to enjoy the kit and Freddie was being entertained in another room!

The first thing we did was get all the supply's onto the kitchen floor, James had great fun pulling the stuffing apart and stuffing it into the bear skin! 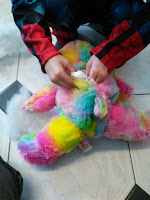 Mummy helped to make sure all the stuffing got into the Bears arms, legs and back of its head before James put the courage star in and put the rest of the stuffing into its belly! Mummy then zipped up the inside and closed the velcro fastening.

James then named his bear Rainbow the Bear and mummy filled in the birth certificate and the passport! We took some photos of Rainbow and mummy has printed one out at the right size for his passport!

This was such a fun activity for James and mummy to do together, that mummy is now looking to purchase a kit to make a bear for Freddie and we are also looking at the party kits that Be My Bear produce for James birthday party in August! 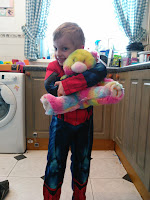 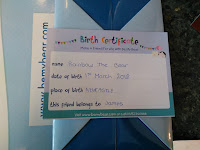 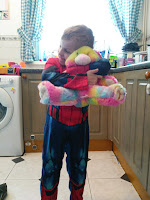 **We were sent the Be My Bear 16" Rainbow Bear kit free of charge in exchange for our honest review. All opinions and pictures are our own**

Email ThisBlogThis!Share to TwitterShare to FacebookShare to Pinterest
Labels: Be My Bear, Home made bear, James, Kit, mummy, Rainbow