When Freddie was younger we reviewed the fantastic SnoozeShade original for his pram and now two years later we are still using it. So when the lovely SnoozeShade team asked if we would like to review the plus deluxe version we jumped at the chance!

The SnoozeShade Plus Deluxe is absolutely brilliant. It has a zip across the top for a sneak peak of the child, and the snooze panel is made up of two parts, one blocks 80% of uv rays allowing the child to be able to see out. The second part of the panel velcros over and together they block 97.5% of uv rays. The panels can be left open as it gives the child some shelter from the elements.

We were planning to take the plus deluxe on its maiden test drive on a day out in London over half term! But as our original pushchair broke on the way to my in laws house we never got a chance to test it out on the one we replaced it with.

I had done a test run on our original travel pushchair before we had gone away and I totally fell in love with the plus deluxe! The plus deluxe fastens on with little poppers compared to the velcro that the original has. I love the little pocket to tuck the blackout layer into when it's not in use. 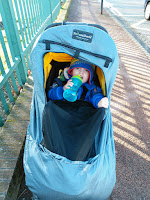 Our first chance to use the plus deluxe was just after the school holidays! Freddie had been to playgroup on the Tuesday afternoon and I had taken our Mamas and Papas Armadillo up to the school to collect him. It was a bitterly cold afternoon and we had 30 minutes to hang around before we could pick up James.

It literally took five minutes to fit onto the pushchair, even with Freddie playing peekaboo with it! I love the fact it shelters Freddie from the wind as well as the sun. We had the blackout panel half zipped down so it gave Freddie lots of protection from the elements! 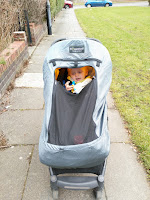 Since then we have used it a few more times to block out the wind and the cold temperatures off Freddie. I'm really looking forward to taking the SnoozeShade Plus Deluxe to Majorca later in the year so much so that  I can't wait to take the SnoozeShade up to my mums house and test it out on the Joie Nitro that we will be taking to Spain with us later in the year!

**We were sent this product free of charge in exchange for this review. All opinions and photos are our own**
Posted by Victoria Hockley at Saturday, March 03, 2018