Freddie actually managed to fall asleep at playgroup due to the heat on his Tuesday session! I had to take his pram into the classroom to see if I could transfer him from the playgroup buggy into his own armadillo, but as normal he woke up! He set a new Freddie record thought at his Sure Start group! Normally if there is water outside it takes him a good half an hour to get himself totally soaked but last week it took him a grand total of seven minutes!! One of James school friends mum is a volunteer at our group and Freddie adores her!

James has actually been wearing shorts to school and on the days its been scorching hes actually left his jumper at home!!

Mummy has been taking it easy this last few weeks as I managed to cut my thumb open quite badly on a tin and I still have a dressing on it as it keeps reopening when I am doing things with the kids!!

This is actually the start of the last week of the half term at school! It really does not seem like five minutes since the kids went back after easter!! We are spending most of the next week with Nana and Gaga and Mummy cannot wait to have some extra pairs of hands!!! 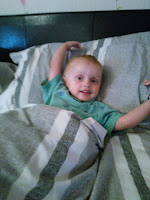 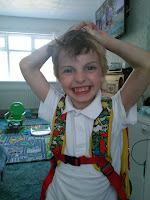