This weekend has been quite a chilled one before James goes back to school after the half term holiday. We actually have only spent two nights of half term at home!

Friday we woke up at nanas house! Nana and gaga had picked us up from home on Thursday lunch time as James had to get his eyes tested! We had quite a chilled out day watching tv and playing with all the toys the boys keep at nana and gaga's house, in the afternoon mummy and nana took the boys across to Amble as we needed to grab a few bits from the shops and James wanted to go and see the fishing boats! The boys had some quiet time in the afternoon and snuggled up on mummy's bed to watch Peppa! 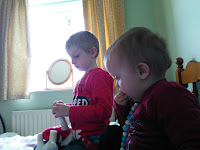 Saturday we were up playing with the toys as mummy's laptop was meant to be coming back from repair (it didn't come back and mummy is cross!!) We needed to go to argos at Alnwick to return Freddie's buggy and pick up the new one (post will come on that soon!) while we were there we decided to pop into sainsburys and pick up some bits for tea. Freddie was thrilled to get his first pair of slippers which had Hey Duggee on them! While mummy got James some Superzings! We had an early tea as Freddie hadnt napped and he was exhausted. While mumm, nana and Freddie were out James and gaga got the scalectrix out! They can only really play on it when Freddie is either asleep or not in the house as he causes mayhem with it!

Sunday well Freddie decided he was going to wake mummy up at 0315am wanting to watch Peppa Pig! So mummy had an early start, Freddie eventually went back to sleep around 0430am and slept till just after eight, nana took him downstairs and gave him some breakfast so mummy could grab an extra hours sleep! We then left to go home around half past ten. We met daddy at aldi to do some shopping and the boys went home in the car with nana and gaga while mummy and daddy walked back. Once we were all back home we had some lunch and the boys played with the their toys. The early start caught up with Freddie and he passed out in the middle of the lounge floor for the first time ever! He then woke up and climbed onto mummy's knee and went back to sleep and mummy joined him! The boys were both in bed and asleep by eight ready for the week of school runs and playgroup ahead!

So this was our weekend happy!