So the biggest thing to happen this week was James finally turned six years old! Mummy and the boys have been at nana and gaga's house since last Monday as we all had dental appointments and then Daddy had to go away for a couple of days with work.

On Tuesday we went to the local nature reserve at Hauxley. The boys had a brilliant time running along the path. Freddie started off in his pushchair, but we let him out for a run. It was so cute seeing James holding his reins!

Wednesday started off pretty quiet. We did a video call with daddy before he went to work. Mummy had some work to do on her iPad, so James curled up watching YouTube kids and Freddie was watching Blaze and the Monster Machines on the kindle fire.

Daddy got back on Friday night and mummy went home to meet him and to also sort out some bits for the holiday without the boys being around! We then went up to nana and gaga's house on Saturday morning.

On Saturday mummy and daddy arrived at Nana and Gaga's around lunch time, James had decided since it was a nice day he wanted a BBQ in the back garden. We had such a lovely time! Both boys were so excited and hyper that we didn't get them into bed till half eight!

On James Birthday Freddie was awake at 6am and we had to give him milk and cereal in bed to keep him quite till James finally woke up around 7! Then it was downstairs to open his presents! We had his big present of a scooter hidden behind his other smaller presents!!

Later on we went to the local pub The Hermitage for their amazing carvery! 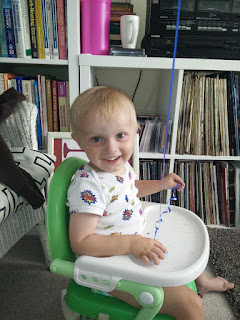 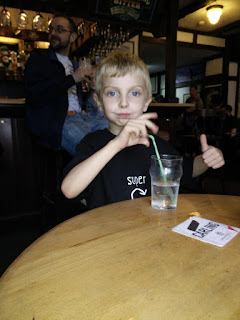