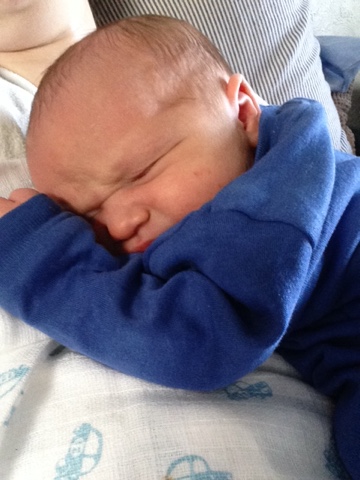 Posted by Victoria Hockley at Sunday, November 29, 2015 No comments:

The arrival of Freddie

So Freddie Andrew Tinline Hockley arrived safe and sound on 25th November 2015 at 1219pm weighing 7lbs 2oz.
As I said in my 38 week update I was hoping the midwife would refer me back to the consultant, which they did. They rang up there and then getting me an appointment for the following Tuesday when I would be 39 weeks pregnant.
We (Andy, myself & my mum) went along to the appointment to find out the safest way to deliver Freddie after all the trouble I had when I had James with the slow labour and how fast James came out causing a tear.
We were advised that a c section was our best option. Another appointment was made for me to go in on the Friday at 39+3 to make all the plans.
So fast forward to 25th November when I was 40+1 weeks pregnant. This was the date we were given for the section. I had to be in the RVI (Royal Victoria Infirmary) for 0730am. We arranged for James to be with my parents the night before and that once we were in recovery Andy would let them know. We also arranged that once we had the OK Andy would ring them to come in with James.
I was third on the list for that morning so once I had all obs done, we chilled out n as we hadn't had much sleep the night before plus it had been an early start for the hospital.
They took me down at 1120 and I did start to get a little nervous as I knew we would soon be holding Freddie. First thing done was a cannula in my wrist as I have pathetic veins in my hands. All too soon they had the spinal in and I was lying down. The combination of the medications made me feel sick so anti sickness medication was given.
The first I was aware of Freddie being born was hearing him cry which made me cry as when I had James because he came so fast I was more stunned than emotional. The midwife brought him over to me then took him to be cleaned and weighed. I couldn't believe he was 7lbs 2oz! 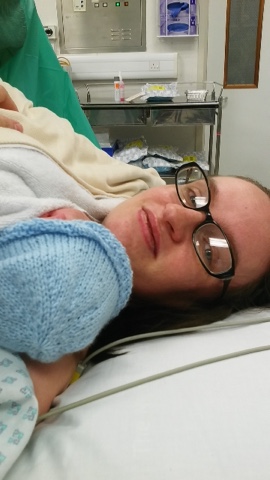 He was brought over to me for skin to skin which was something I didn't get with James, so this time it was important I got it and also that I did his first feed as again I also missed this with James. I did have some more nausea so more anti sickness medication was given while Andy had cuddles with his second born.
Once we were in recovery, I gave Freddie his first bottle which he guzzled down. I then got his wind up first attempt. We also started letting people know that he had arrived. We had made decision that nothing would be posted on Facebook/Twitter/Instagram etc till after James had met him. 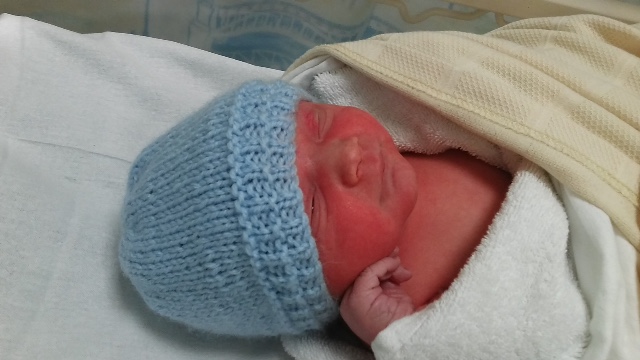 Once I was able to start moving my legs, I was transferred to what is called enhanced recovery. It was once I was in here and able to eat and drink that mum,dad & James were able to come in and see us. I was so happy to see James as I had really missed him.
Once I was in my own night clothes and able to walk I was transferred to postnatal ward. Once I was in there Andy and James went home and I finally got a chance to rest although I did spend most of my time staring at Freddie.
Once I had seen the doctor I was cleared for discharge, so once we had my painkillers we booked a taxi and home we came to start our life as a family of four!
The care we received from the community midwifes and the staff of the RVI was amazing. I can't thank them enough for bringing our second little man into the world safely. 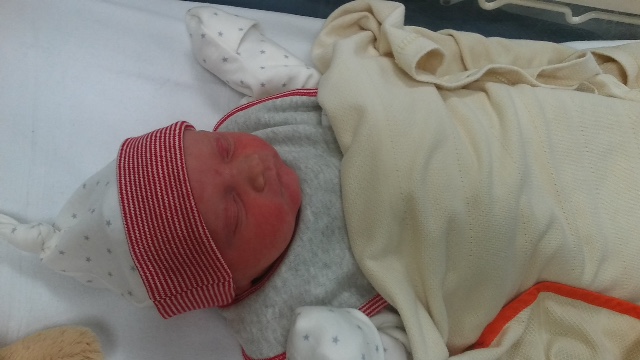 Well I have made it to 38 weeks and I'm not going to lie, the last two weeks have been totally and utterly horrendous pain wise! I now have just two weeks until his due date but if it's like last time it will be three weeks!
Last week at 36+6 had to phone midwife and the assessment unit due to the amount of pain I was in sitting, standing, walking in fact everything I did caused pain. Was given the advice of paracetamol and a bath. All ok when you have someone in the house but I hate taking painkillers when I'm at home alone with James and I have been like that since he was born. I don't even like having a bath when I'm home alone with James at the moment, in case I can't get out. I can't even read James a bedtime story as I cannot get comfortable on his bed. Poor Andy has been getting home around half past six every night and been having to do bath time & bedtime as its impossible for me.
Then on Saturday at 37+4 I was even worse with pain trying to get around, it got to the point James was having to help me up the stairs, so again spoke to midwife who wanted me to go into assessment unit, but low and behold their answer was go see GP, which I haven't been able to do as all the triage appointments would leave me unable to get to the school in time for James.
Baby is doing good though, he's head down and a proper fidget. He has been moving his body from side to side which has been a big source of my pain. I don't have any fat on my stomach so I feel ever little movement which at times is agony. He's a very big squirmer and likes to poke his bum & feet out! It feels like he's going to have big feet like his big brother! I just hope he does not have smelly feet like James!
I'm back to midwife on Thursday so hoping she will refer me back to consultants to see what can be done to help me. I really don't fancy going over due again as it was hell last time as I was in slow labour for a week & no one knew when my waters actually went therefore I ended up back in hospital with a five day old baby, but add James into the mix this time that would be even worse - having unsettled baby & unsettled three year old, especially now James is at nursery.
James has been pretty unsettled due to how mummy has been, even acting up in nursery which is not like him at all. I really hate how all my pain and lack of being able to move around is affecting him. I'm so hoping baby comes sooner rather than later so we can start being a family of four and going back out and about without me struggling.
But over all we are so ready for this boy to come! His pram is ready in the kitchen, his Moses basket has been moved into our room so James can get used to it being there and yes CB bear has already had a sleep in it on more than one occasion! 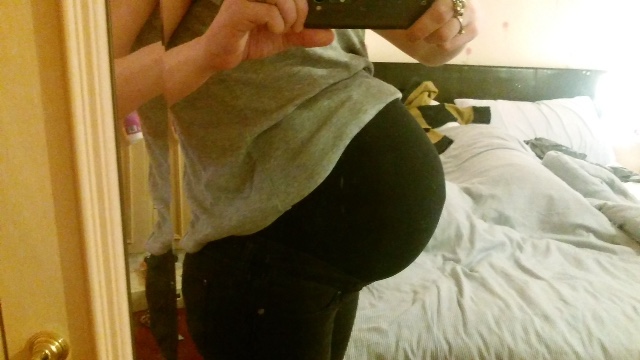 Posted by Victoria Hockley at Tuesday, November 10, 2015 No comments:

Half Term Holiday - We Survived!

Woo hoo as I write this James is back at nursery on the countdown to Christmas! This week is his nursery rhyme challenge on Wednesday which mummy is really looking toward to. Will be keeping my legs crossed to make sure baby stays put till after its finished!
I'm not going to pretend that the weeks holiday was easy, as it was far from it! Being 36 weeks pregnant with a energetic three year old to entertain was hard work! So much so me & James ended up going to stay with my mum & dad for a few days as after one day of no nursery I was worn out & exhausted!
It was great being able to relax as James only wanted his nana & gaga to play with him! He has them wrapped round his little finger! Whatever he asks for he gets lol!
On Friday we took a walk to our new aldi, which has only been open a week as we needed to get some fruit. We then came home, had lunch & spent the whole afternoon watching Thomas films till it was bedtime!
Saturday we got up & went back to aldi to do our weeks shopping. We then went home put it all away then went into town as we needed to get a present for James nursery friends birthday. We also managed to get a present for James to give his baby brother when he's born! We went to a little cafe in granger market for coffee, well latte for daddy & hot chocolate for mummy. Oh and yummy cake which James demolished as we think it will probably be the last weekend we get out just the three of us before baby arrives!
Sunday James had a birthday party to go to at half past three, so we cooked a roast for lunchtime and chilled out for the day watching football till it was party time. James had a brilliant time at the party which was at the local sports centre near our house in their soft play!
We also had a major breakthrough over the holidays - James stopped using his potty & started using the toilet instead! He also now asks for the toilet, which is a huge milestone as just a couple of weeks ago he was petrified! Daddy bought him a Jupiter from fireman Sam as a well done present!
So he's back to nursery! Hope he's having fun and behaving!
Posted by Victoria Hockley at Monday, November 02, 2015 No comments: