Redesigning my blog with Font Bundles

When I first set up the blog back in May 2014, I went for a very simple blog header, which had cartoon monkeys on, and a very simple and plain layout, especially as I did not think I would actually keep it up, but I did and here I am six years later and I still have the blog going.

When the blog was first set up it was hosted on blogspot.com under the name mummy to my little cheeky monkey. This name came from James who at the time was twenty-one months old and we used to call him our little cheeky monkey. I then took the leap in January 2017 to take the blog self-hosted onto the www.victoriahockley.co.uk domain name. And now finally nearly two and a half years on from going self-hosted I am dropping the cheeky monkey from the name, but I am keeping it as the email address as it would be far to much stress to change it on everything and email out contacts to change it.

Over the last six years I have had many simple designs using the simple fonts you get already programmed onto the computer. But finally, after six years I am ready to take the leap and download some fonts to make my logo and header stand out.

Since the header is used on both the blog and also on Facebook I wanted something that will pop out and have a wow factor, but also since the blog does not make that much money I do all the graphic work myself as I simply cannot afford to out source the work. Especially in the current situation, all spare money I have is going on the boys who have decided it was the perfect time to outgrow all their clothes and some of their shoes.

I searched on GoogIe to see if I could find an alternative to Dafont, I then decided to have a look at a fantastic website called Font Bundles, who have loads of brilliant free font available to download!

The first font that I looked at was called Bring Heart, I really liked this one as it was kind of like a script font, but eventually I did rule this one out as I thought it would be hard for people to read who are partially sighted.

The second font I looked at was called Monkey Mayhem. This one was quite bold and stood out. This font looked like it was going to be a possibility for my new header on the blog and, also on Facebook, especially as it gives a nod to the original name of the blog – mummy to my little cheeky monkey.

The final font that I looked at was called Playful Jake. This was quite cartoon like, I decided to go against this one as I wanted something that stands out and is easier to read. 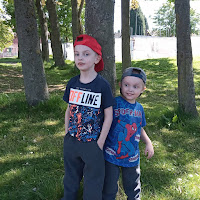 Now that I have chosen the font, I had to start thinking about what pictures I was going to use. The last picture I used was one of me and the boys taken before we went out to see a theatre show, but this time I thought I  was going to use pictures of the boys on their own, but eventually I went for these two pictures of the boys together that I took on a recent walk around our local area. 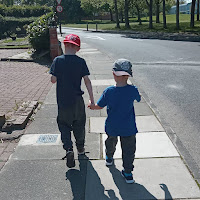 The first picture was taken of the boys from the back as they walked back towards our house. I chose to use one of the boys from the back as it is actually my current favourite picture of the boys together. The second one is from the same walk, they are building some new houses near us on a patch of grass that used to have some blocks of flats on and round the edge there is some grass with some lovely trees which the boys were running around and erm hugging them so I have no idea how I managed to get them to stand still for a couple of pictures.

So above you can see the final design that I went for, for my new blog header. This is the first time you will see it along side it now being uploaded to the top of the page. I always tend to go for designs with a lot of white in them and stick to a plain background in either white or pale blue. I do this as it is less fussy and so much easier for people to read, especially those who have sight difficulties.

**This is a Collaborative Post**
Posted by Victoria Hockley at Thursday, May 21, 2020