Who would have thought this time last year that by March we would be carrying hand sanitiser everywhere we went. I sure didn't! But sure enough just a few short weeks later the pandemic took hold and here we are in 2021 still under strict restrictions. James has had no face to face Cubs since the start of November, I've had no face to face Beavers since 4th November. Everything is being done online!

Before the school closure in March 2020 the boys were washing their hands a lot more than normal and sanitiser was used before they did a lot of activities. Both boys began suffering with bad dry skin on their hands from all the washing and sanitiser.

Even when Freddie went back for two weeks his hands were so sore, same with James and he was only in for one day! So when they went back in September they both took sanitiser with them that we knew wouldn't agrivate their skin, especially with Freddie and his allergies.

This is where Steril-eeze comes in. They asked 2000+ adults about their sanitiser habits during lockdown one and the effects on their skin. 63% noticed a change in their skin, so even though 98% said they wanted sanitiser to kill viruses and bacteria, 96% said they also wanted something that didn't irritate their skin. 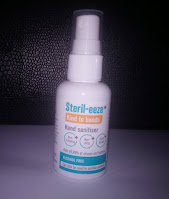 Steril-eeze is a new concept, harnessing the science of Hypochlorous Acid (HOCI) and is scientifically proven to kill 99.99% of harmful viruses and bacteria. It is alcohol free so it doesn't irritate,sting or dry out the skin. It can also be used to sanitise surfaces.

We have been using this for a few weeks now with the boys and not once have they complained of sore hands or had nasty dry patches.

I love the fact that this can also be used to sanitise surfaces, so if I am at the supermarket I can use it to clean the self scanner, the trolley handle and also my hands.

I will definitely keep on using Steril-eeze! And I can see it becoming the first thing I pack when I go on any Beaver adventures! 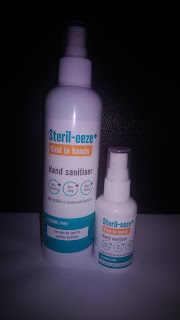 We are thrilled to be giving away a set of Steril-eeze products, so fill in the form below! Competition is open for seven days!

a Rafflecopter giveaway
Posted by Victoria Hockley at Friday, January 22, 2021