This week has been trying to get James back into some sort of a normal routine.

For the last week since we lost nannie he's not really been napping much. He's been very clingy to his nana and mummy

So today being Thursday we are back at our toddler group. Its a relief to see James running around with his little friends and playing with the toys rather than being glued to my side all the time.

For me its also good being back as its a bit of normality back in our lives before we have the funeral to face on Tuesday morning. 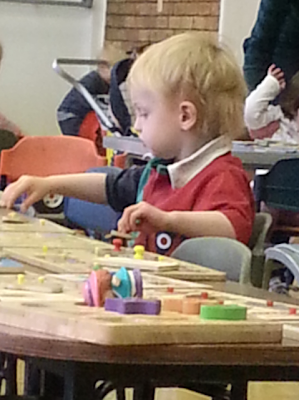 James has been into his jigsaws and puzzles.
He also loves playing with his train set at his nanas. He got it for Christmas.
After toddlers we went to the metro centre with my parents to try and get me a pair of shoes to wear on Tuesday. We were probably in every shoe shop and department store and had zero luck. We then went across to asda and again no luck but James did get a new shirt. I finally found a pair at tesco!
Posted by Victoria Hockley at Thursday, June 05, 2014