When you hear the word Trunki you automatically think of the amazing suitcases on wheels that you see parents pulling their children along on in airports or train stations. And yes that was their first and probably their best known product.

For part of the 2014 Mother and Baby magazine awards, one if the products we have been asked to review the "Yondi".

"Yondi is a specially designed travel pillow that connects under the chin with hidden magnets to form a soft and supportive cushion. This stops your child's head rolling forward so they can snooze in comfort. It also comes with the unique Trunki Grip so your little one can attach their favourite comforter or blanket. Suitable for ages 2+" (http://www.trunki.co.uk/yondi)

The Yondi comes in 7 different designs and we were sent the leeroy lion, a bright yellow cushion with a lions face and marine on it. 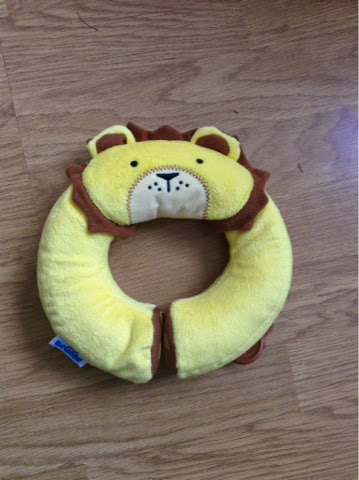 When I first showed it to James his face lit up and he wanted to put it on straight away. In fact he actually did! 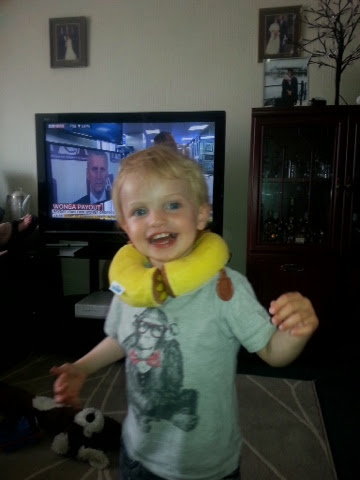 We were going to be traveling home by bus later on and I knew from past experience that James would fall asleep sitting up in his pushchair and there would not be enough space to recline him without moving the pushchair and therefore causing an obstruction to the aisle.

When James started to get sleepy I put the Yondi around his neck and he fell asleep virtually instantly and slept for a good chunk of the journey. He didn't have the magnets closed, but it did keep him comfortable and he wasn't actually grumpy when he woke up like he normally is after he has fallen asleep in his pushchair on the bus. 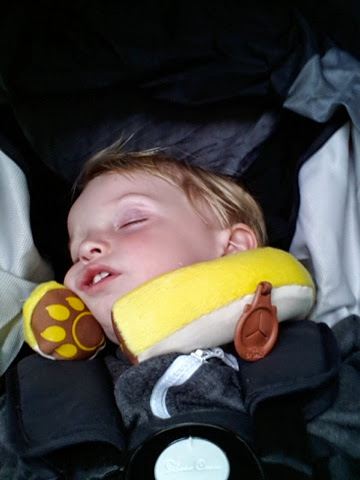 We have now used the Yondi a few times on the bus and we both love it to bits. For me I find it stops James head rolling forwards and it keeps him comfy while he sleeps. For James he loves the magnets and he keeps opening and closing the Yondi totally fascinated at how it stays closed.

This is actually a product I was looking at in Boots just a few months ago saying how good it would be for James for both on the bus and in the car and I was thrilled it was one of the products we got to review!