Special Decorations On Our Tree

As it's nearly Christmas, I thought I would share some of the special decorations we have on our tree. 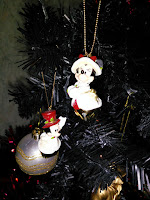 First off we have our Mickey and Minnie. We bought these in magic kingdom at Walt Disney World on our honeymoon.Walt Disney World has a Christmas shop all year round which we adored! We could have spent a fortune in there, but we settled in these adorable little bells. The first year they went on our tree was Christmas 2012 as it was our first as a family of three with James, who was four months old. 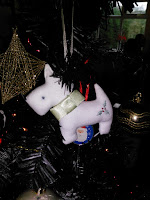 Next we have our little westie. We bought this in 2014 in memory of my dad's auntie who had died earlier that year. She used to have a westie and loved everything westie related so getting a westie in memory of her was the logical thing. When I found this in our local John Lewis I knew I had to buy it. It was Moyra all over and I think it would have been something she would have probably bought for her own tree as she loved Christmas! 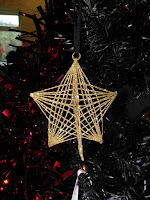 Then we have our gold star. This was also bought in 2014. This was bought in memory of my Nannie who we lost in the May of that year. James was extremely close to her and when she died we told James she had gone to be a star in the sky. James chose this on a trip to Tesco with mummy one weekend. Even now almost four years on James still tells me that Nannie is his star in the sky and he loves her. 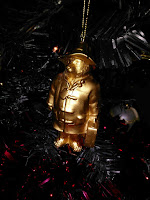