It is creeping closer and closer to the summer holidays for James and Freddie! We only have about 4 weeks left of term now! James has a singing picnic coming up with his school the second last week of term. All the families are invited in on the second last Friday of term afternoon and each class sings a song, Then the whole school do some together!! James has been having a ball practicing his songs at home! He's been singing Favorite Things from the Sound of Music for the last week driving us all crazy!

Since we have been having some nice weather we have been going outside into the garden before school if we have time and then leaving a little bit earlier and going for a nice walk before we go drop James off!

Freddie has been waking up so early! Monday he was awake at 0420! So poor mummy was up with him while daddy and James kept sleeping! Only plus side has been Freddie actually napped meaning mummy could sit and do some work!!

After school and playgroup on Tuesday we took a box of water outside into the garden and the boys had a brilliant time! Freddie was soaking wet!

James loves the filters on Facebook photos so we were messing around with them one morning before we went to school and this was my favorite one of him! 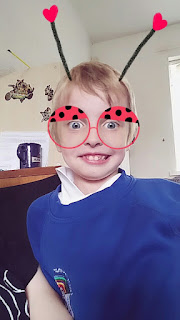 The SnoozeShade has been coming in very handy with Freddie! Its been so hot and sunny, but by using the shade it has kept him cool and happy on the school run! 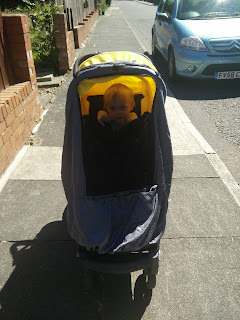