My favourite authors are Cecilia Ahern and Cathy Glass.

I first started reading Cecilia Ahern's books when Nicky from Westlife started talking about them as she is his sister in law. I got her first novel, P.S. I love you when it was first released and I loved it!

I think I must have read it three or four times in that first year. The book was later made into a film and to be honest I really didn't like the film it was not true to be book at all. Another one of her books which I loved was made into the film Love Rosie, which was good, but again it was not true to the book. 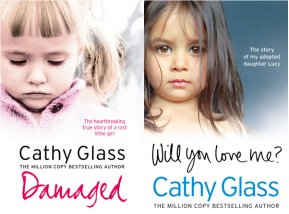 I first got Cathy Glass books when I met Andy. He had read a couple of them and leant them to me as I needed a new book to read on the train when I was commuting up and down the country. Nine years on and I think there is only two or three of her books I've not read! Cathy Glass is her pen name as she is a foster parent and all her books are based on real life stories of children she has looked after.

I've not really got any other favourite novels apart from the babysitters club series that I read as a teenager!