Weekends can be very manic in our house! James is normally exhausted after a busy week at school, so he normally wants to chill out in his pjs, but life has to continue homework and the weekly food shop need doing!

By the time the kids are fed and dressed and the shopping is done its normally lunch time and James is moaning that he is hungry.

This is where the Rustlers Southern Fried Chicken Burgers come in! They are ready after 90 seconds in the microwave! They are a quick, convenient and affordable meal when mums and dads need it most!

We were challenged to buy the Rustlers Southern Fried Chicken Burgers and hack them to suit our family!!

So what did we do with our Rustlers Burgers to Hack them?

As mummy and daddy are trying not to eat bread at the moment so we decided to hack ours by removing the burger from the bun and using wraps instead. The buns were saved thought for the kids!

We decided to do ours with sliced peppers and diced onions. We lightly fried the onions and peppers in spray oil. 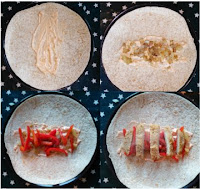 We put Tesco sweet burger sauce onto the wrap and spread it out, we then put a few spoonfuls of the onion onto the sauce, then a few of the sliced peppers on top of the onions. We heated up the burgers following the instructions on the packet and then sliced it up and put it on top of the peppers and onions then folded up the wrap like we would normally do.

This was so yummy and a really good and a really quick lunch for a Saturday. Mummy tends to eat wraps for lunch most days so it really was a no brainer to hack ours using wraps. The ones we used for this project were wholemeal wraps, but we also quite like wraps flavoured with herbs.

That was how mummy and daddy did the hack on their burgers, but how did the boys have theirs? Freddie just had his as it came, but James he decided he wanted to have mustard on his bun instead of the mayo sauce that came in the packet and he had some steamed carrots and broccoli on the side! A few months ago the thought of James eating carrots and broccoli with his dinner was laughable! He would never eat them, so for him to ask to have them on the side of his dinner is a big thing! 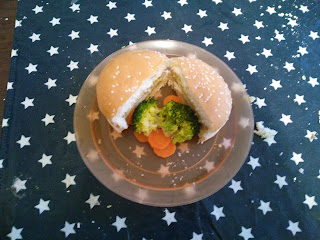 We really enjoyed taking part in this project and would definitely make our hacked burgers again! I think it would even make a great midweek tea for the kids, especially when we have had a busy day of school and playgroup!

This post is an entry for Britmums Rustlers Burger Hacking Challenge Sponsored by Rustlers
Posted by Victoria Hockley at Thursday, January 25, 2018