Nursery induction- The One hour visit

So we have had our one hour visit to nursery.
How did it go you ask? Well it started out great. James was happily playing outside till it was time to go in. Once in he saw the reception class next door to nursery had diggers so he dived in & got upset when mummy had to take him out.
Once in the right classroom he soon perked up once he saw the animal figures and of course the fire staton he fell in love with before the summer.
He played quite happily in the classroom & then the kids were told they could go outside. This is when I knew there would be problems as James had spotted the diggers in the sand pit. I sent Andy a message asking him to come and meet us.
Once it was signalled as being time to go, that's when meltdown central really kicked off. I managed to get him into his coat and get him outside. Luckily daddy was there & he came n picked him up and took him home while I popped to post office.
Meltdown central was still happening 45 minutes later! Still he calmed down when he got hot chocolate and mummy put on Thomas king of the railway. 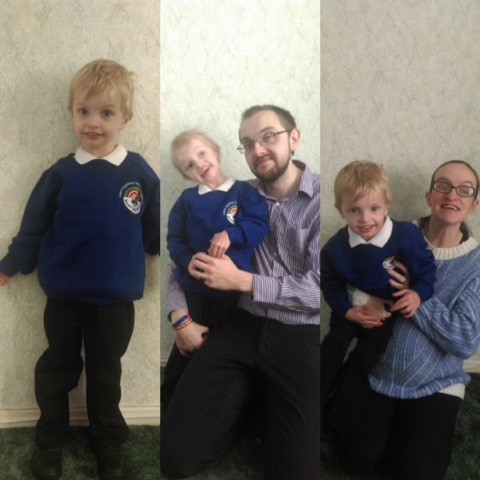 I can't believe how grown up my little dude is!
Hopefully things will go better next week when he's in for longer and mummy starts to leave.
Posted by Victoria Hockley at Wednesday, September 16, 2015