Argh only 12 weeks till due date! Yes panic has set in as we have a list as long as my arm of stuff we still need to get for little man, his bedroom & not to mention the rest of the house!
I'm feeling really really big! I haven't been able to see my feet since about 18 weeks hence why last night I ended up misjudging the freezer, stubbing my toe, then shutting freezer door on my foot. I'm now sporting a nice purple bruise on my left big toe!
Think it's time to start slowing down a bit & remembering that I'm pregnant & only have a few weeks left to go! Im still baking crazy & made a four layer piñata cake covered in sweets for James birthday! Now all I need to do is decide on Andy's cake for his birthday in a couples of weeks!
The biggest thing to happen since 25 weeks is James has turned three & finally started potty training! He starts his nursery induction on 16th September so that will keep me busy a few weeks! Especially as the first full week without parents being in is 5th October!
James seems to be getting excited about his little brother & Christmas lol! We have to keep reminding him that before Father Christmas comes, his little brother will come first!
Baby boy's movement has got even stronger this last week! The kicks are starting to hurt a little bit, especially when they are around my hips or ribs! He spent the whole of my friends wedding service booting me in the ribs so I spent the rest of the day in agony! I seem to get a lot of kicks and wriggles on a night still when I'm settling James in his bed. Baby boy seems to react to his big brothers voice quite a lot!
Braxton hicks have also started up this week. Exactly the same time as when I was having James. Forgot how uncomfortable they were!
The nursery is looking pretty good. The cot is together, we just need to get a mattress and some new sheets. We have the chair that was in James room as a baby in ready for when little man moves into his own room. I'm hoping he will be in with us a bit longer than James was. James was in his own room by eight weeks as he had out grown the carry cot we had.
Next update will be 32 weeks! 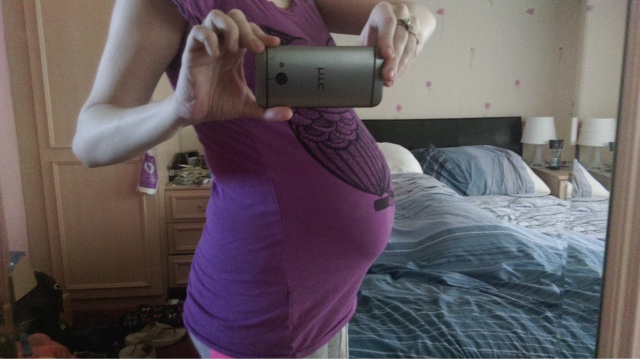