Another week of Living Arrows and its week ten!

It has been so COLD this week!! It has been in the minus figures when we have been doing the school run in the mornings! We also had to deal with the loss of my aunt and uncles border collie Max. James adored him and was heartbroken.

James had a doctors appointment before school the other morning so we had to leave home at around 8am so we could pop into aldi on the way down and grab some milk before going for James appointment and then straight to school! And would you credit it, we had a few inches of snow the night before! Luckily we got in and out the doctors pretty quick so James was at school by ten past nine and so mummy and Freddie were home in the warmth by half past nine!

Freddie has been such a cuddly little boy lately. Last weekend he was so cuddly and actually fell asleep cuddled up to mummy on the sofa which he hasn't done in a long time! He had his normal two sessions at playgroup this week and we also went to our sure start group as mummy cancelled her dentist appointment as the weather had been so cold and then we had snow and even more snow!

So yes it's been a cold and snowy week for us, poor James was gutted that school was open on Wednesday but sadly their forest school got cancelled due to the weather! Then all hell broke loose when we got to pick him up early and then suddenly school was closed for two days! That meant they missed having World Book Day! 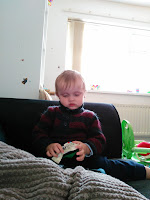 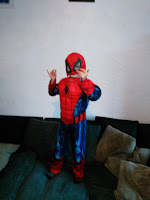 Thank goodness that school is back open! This mummy is exhausted!