So it's finally the first of December and this year I have decided to try and take part in Blogmas! Blogmas is a post everyday in the run up to christmas with the last post going live on christmas day!

This is how the boys were surprised this morning - the First of December! 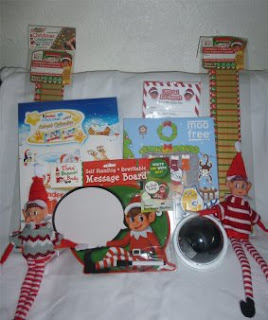 First we have their Christmas Elf Rhul! We introduced him last year and it was fantastic to see how knowing an Elf was reporting to Santa made James behave! This year Rhul has brought a friend with him called Elfis. Mummy thought it was a good idea to get a second elf as Freddie is getting older!

For their Advent calendars, James has a Kinder chocolate one as he is literally obsessed with anything Kinder Related. Since last Christmas we have found out Freddie is dairy and soya intolerant so we had to hunt around and we found out that Moo Free chocolate is both dairy and soya free so we knew this was the perfect choice for him! Freddie has tried the Moo Free chocolate before so we know he likes it!!

I'm looking forward to seeing how the Elves behave this next few weeks! Last year Rhul was a naughty elf and we found him doing all sorts of silly things!

Our Elves arrival has been quite boring compared to some. I mean you can actually get balloons with the elves inside! I think in a few years we could try something like that but for now I think the boys are happy for them to be sat on the sofa!
Posted by Victoria Hockley at Saturday, December 01, 2018